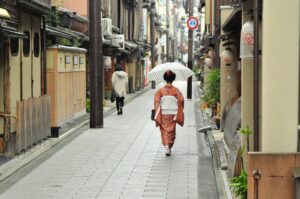 Bow— even when you see a telephone pole.

Respect for hierarchy forms the bedrock of  maiko manners. When she encounters any of her superiors, geiko or senior maiko on an afternoon walk, for example, the maiko must stop, bow, and greet the other. Being in a rush is no excuse to forego this ritual.

This behavior becomes so ingrained that, as the saying exaggerates, the maiko will even accord a telephone pole the same respect since it is “higher” than she.

The maiko, using the hanamachi dialect, humbly requests the other’s favor or guidance. Otanomō shimasu. One of the first phrases she learns as a trainee.

Professor Kumiko Nishio, who researches maiko training, explains how the greeting ritual benefits the brand-new trainee (18-21).  Too new to her hanamachi to know its community members well, the trainee must make a favorable impression on all she meets. Whether or not she knows them yet.  After all, these elders can positively influence her career, recommending her for parties and other assignments. Conversely, ignoring greetings would be a sign of disrespect.

It’s tempting to consider this emphasis on formal greetings a quaint custom of the hanamachi. But I remember many years ago hearing an American university leader advise assistant professors concerned about gaining tenure in the U.S.  He urged them to get in the habit of greeting their department colleagues. Worried, one young person asked, “But what can I do?  My office isn’t even in the same building as my department.” The leader responded, “Then, go to the department every day to check your mail. Greet people. Make yourself known.”

Even when you see a passing car with your superiors aboard…..

Sometimes signs of respect in the hanamachi can be taken to comic extremes. Kiriki Chizu, a maiko in the late 1960s, recalls repeatedly being told, “Don’t forget your greetings even when you see your sempai geiko in a car coming down the road (32).”

Once, completely unaware, she failed to heed this advice. 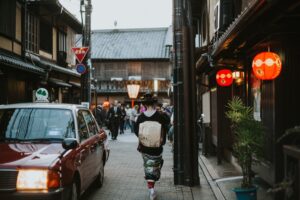 Photo by Jie on Unsplash

She did not notice the car with her geiko colleagues aboard.

An offended geiko swiftly complained to Kiriki’s elder sister, who scolded her.  Kiriki knew it was useless to explain how the light shining on the car windows must have prevented her from seeing who was inside. This “excuse” would not work in Gion and she had to apologize to the geiko, promising to take more care in the future.

As a retired geiko, Kiriki tries not to place maiko and young geiko in tricky greeting situations. Many may get the sense when they see her walking in the hanamachi that she is somehow connected to the community. Not knowing the retiree’s name or position makes them uncomfortable, unsure of what to do. Kiriki tries to put them at ease by avoiding  meeting their eyes and simply walking on. They seem relieved.

When in doubt— bow.