Out with the Demons! In with Good Fortune!

Likening Setsubun to New Year’s Eve, Michael Dylan Foster describes it as “a dividing point between the old year and the new and therefore a ritually meaningful moment of transition.  This is a crack in the flow of time, a potentially dangerous bridge between one period and another, during which both good and bad spirits might enter” (124).

The Mamemaki Ritual of Tossing Beans

The mamemaki ritual of scattering roasted soybeans serves to drive out the evil spirits. I remember doing this in college in Japan. So much fun! We tossed beans out the high windows of our residence hall into a yard out back. We shouted, “Oni wa soto, fuku wa uchi! — Out with the demons, in with good fortune.”

As we shall see, maiko and geiko practice the mamemaki ritual and dance at major shrines to the delight of crowds.

How do Maiko and Geiko Take Part? 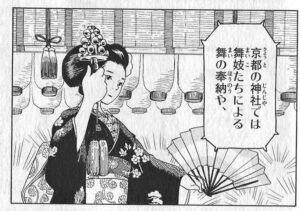 In the afternoons on February 2nd and 3rd, maiko and geiko celebrate Setsubun with artistry.  They offer dances to the deity of the new year at public ceremonies at famous Kyoto shrines. Members of the Kamishichiken hanamachi dance at Kitano-Tenmangū Shrine. Those from the other hanamachi perform at Yasaka Shrine.

Checking online, however, I see that many 2022 Setsubun events in Kyoto appear to have been cancelled, likely due to pandemic precautions. 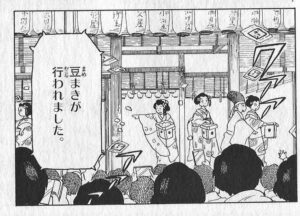 From the stage, maiko and geiko toss out packets of beans to the raucous crowds hoping to exorcise misfortune and catch their own bit of luck.

Costume Play in the Evening at Ozashiki Parties

In the evening, the hanamachi comes alive as geiko, and in some cases, even their clients appear as obake. That is, they become mischief-makers “transformed” into oni by playful disguises.

You may see samurai and other Tokugawa-era figures, ballerinas, Peking Opera stars, and characters from famous films, anime and manga. We find geiko in all manner of costumes.

Why Costume for Setsubun?

As Liza Dalby explains, this costuming practice recalls superstitions.  In the past, Japanese practiced “customs of inversion” during Setsubun to ward off oni. They believed the oni threatened to come closer to humans during this precarious juncture. It was a time when “high becomes low, old becomes young, women play men and vice versa” (120). Women and girls fooled the oni by inverting their usual fashion to play at being old or young (120-21).

Geiko often plan months in advance for this event. Many form pairs or groups of three to decide their theme, devise costumes, and create a short act to perform at the evening’s parties.  Clients gather at teahouses and bars in the hanamachi at Setsubun, waiting for the moment when the obake will appear. Clients give generous tips in thanks for the fun. 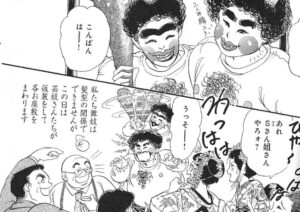 Some clients turn the table by dressing as geiko or maiko themselves, as we see in Yamato Waki’s manga above.  The grotesque sight comically flips the beauty, gender identity, and etiquette of geiko and maiko.

What Kinds of Costumes?

In her manga Crimson Fragrance, Yamato Waki explains that maiko do not participate in the over-the-top costuming because they need to maintain their maiko hairstyles. Similarly, Aiko Koyama explains that maiko may assist their elder geiko sisters with their costumes and props.

Geiko Komomo describes going to over 70 lively ozashiki on the night of Setsubun. She finds freedom in the crazy costuming. “We always have to make ourselves beautiful in our everyday life, so obake is the only time we’re allowed to purposely look a mess, so you can imagine there’s a lot of competition for the male roles!” (132).

Former Gion geiko Iwasaki Mineko recalls going to almost 40 ozashiki on Setsubun in 1972. She stayed only a few minutes at each party.  But she earned enough in tips for a vacation to Hawaii. “That night we made over $30,000, enough to travel in style” (255).

For more on oni demons 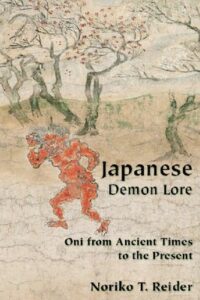 Oni (variously translated into English as demons, monsters, and mischief-makers) have a long history in Japanese literature and culture. They range from fearsome spirits to playful ones. If you want to know more, see Noriko T. Reider’s book  Japanese Demon Lore: Oni, from Ancient Times to the Present (Logan, UT: Utah State University Press, 2010). 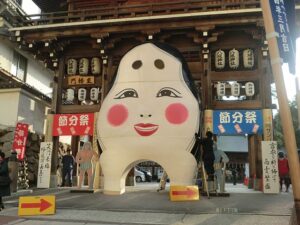 A cheerful goddess features in Setsubun Festivals. People commonly call her Okame or Otafuku.  We find her image in many forms all over Japan.  In our next post, we find out about this happy figure.

Komomo and Naoyuki Ogino.  A Geisha’s Journey: My Life as a Kyoto Apprentice. Tokyo: Kodansha International, 2008.

Koyama Aiko.  Maiko-san-chi no Makanai-san. Serialized manga. Volume 4. Page 101. Shōgakukan, 2017. “A Drink To Bring Out Your Best” (Episode 39) of the manga with English translation is available online: https://mangaboat.com/manga/maiko-san-chi-no-makanai-san/ch-039/
You can see the anime version of Koyama’s Setsubun 3 episodes in Kiyo in Kyoto: From the Maiko House at: https://www3.nhk.or.jp/nhkworld/en/ondemand/video/2094010/

Jan Bardsley, “Out with the Demons! In with Good Fortune!,” janbardsley.web.unc.edu, February 3, 2022.