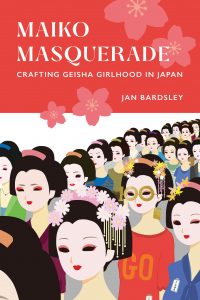 Maiko Masquerade explores Japanese representations of the maiko (apprentice geisha) as an icon of exemplary girlhood in films, manga, and other popular media.  This book traces how the maiko, long stigmatized as a victim of sexual exploitation, emerges in the 2000s as the chaste keeper of Kyoto’s classical artistic traditions. No longer viewed as a toy for men’s amusement, she serves as catalyst for women’s consumer fun. This change inspires stories of ordinary girls–and even one boy– striving to embody the maiko ideal, engaging in masquerades that highlight questions of personal choice, gender performance, and national identity.

Each element of the maiko’s formal costume, from hair ornaments to wooden shoes, is carefully crafted to signify her progression in the apprenticeship. You can find many images and explanations online.  On my blog, I’ll be sharing stories about the maiko’s look.

Map of the Kyoto Geisha Districts. There are five geisha districts, called hanamachi, in Kyoto. Several are referenced in the book, especially the largest, which is called Gion. This map shows their location within the city.