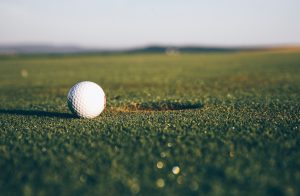 Photo by Markus Spiske on Unsplash.

Today’s post dips into quirky golf stories and graphics. We go from maiko comedy to geiko as accomplished golfers.  Zooming back to the 1920s and 30s, we see golf shaping modern girl fashion in Japan.  Returning to golf comedy makes us re-think the maiko’s current status and training. 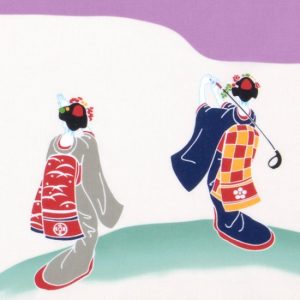 This funny tenugui (cotton hand towel) comes from Kyoto textile firm Eirakuya. It imagines formally dressed maiko on an expansive golf course. They play beneath a vivid lavender sky.  One holds a huge golf club. Her long kimono and obi don’t inhibit this maiko’s swing at all. Nice shot!

It’s a comic fantasy. But it recalls how hard one must practice to get good at sport. When proficient, the golfer makes it look so easy.  Just like a practiced maiko dancing gracefully.

“Geiko are good golfers, and it’s all because of Inoue dance training.”    –Kiriki Chizu

Some of Kyoto’s geiko do develop proficiency in golf.

Retired geiko Kiriki Chizu credits the geiko’s golf skill to her dance training. She develops core strength through practicing the Inoue form of Japanese dance.  Traditional dance, like Noh, emphasizes holding the hips low and the upper body still. Quite a feat. On an earlier post, we saw even world skating star Asada Mao struggling to do it. 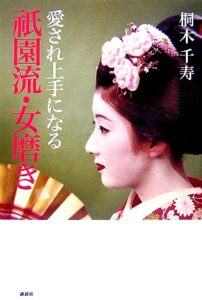 The Gion way to skill in becoming loveable: A woman’s polish by Kiriki Chizu. Copyright © 2007. Kōdansha.

In her 2007 memoir, Kiriki describes an event that captures the playful spirit of the sporting maiko tenugui.  It’s called, Gion Golf Classic.

Held twice a year for over 20 years, Gion Golf Classic gathers about 20 Gion women– active geiko, retirees, and teahouse managers.  Although many teahouse clients also play golf avidly, they may not join the tournament. It’s a strictly women-only event. (Clients may contribute to the prize money though, Kiriki writes with a wink).  (Kiriki, 92; 96-97).

The vision of geiko and clients at the golf course reminds us of the luxury associated with teahouse culture, even outside the teahouse. It also recalls that clients are mostly well-off men, likely enjoying hefty corporate entertainment budgets. The scene also points to the easy camaraderie that develops in teahouse culture. 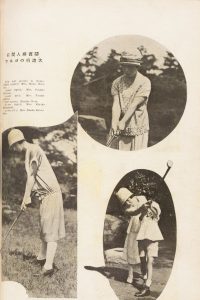 Curious, I researched a bit about the history of women and golf in Japan.  !920S fashions caught my eye.

Often played at expensive country clubs, golf has long connoted aristocratic leisure abroad and in Japan.  The women’s magazine Fujin gahō captured elite ladies playing golf in its November 1926 issue.  Historian Ikuta Makoto describes this event as the first major golf tournament for women.  The  skill of the players and the media attention to “elite ladies” out on the green made it a groundbreaking event in Japanese golf history.

Fujin gahō reproduced the images for its 150th anniversary. The magazine often featured women in western-style sports.  In one photo here, we see a woman giving golf lessons to a girl. 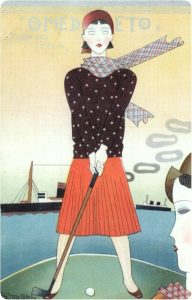 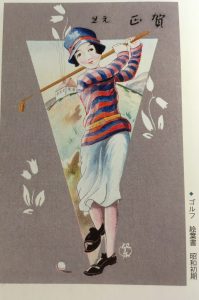 Fashion magazines and films in the 1920s and 30s featured chic women active in sports. Each sport, including golf, had its own costume. Sportswomen at play conveyed leisure and self-confidence. In turn, sportwear shaped fashion design from Paris to Tokyo. Ikuta Makoto displays postcards of modern girls golfing.

Since Kyoto geiko were experimenting with modern dance styles and entertainments in the 1920s, too, I wonder if any photos of modern golfing geiko exist.

Catching up with the times, we see Japanese women have achieved global success in golf. Hisako “Chako” Higuchi became the first Asian to win a major championship when she triumphed at the LPGA in 1977. In 2003, Higuchi “became the first Japanese golfer inducted into the World Golf Hall of Fame” (Wikipedia). By the early 2000s, women may have comprised up to 15% of the golf players in Japan (Guttmann and Thompson, 212).

Back to maiko comedy: What more can we learn?

It is no longer remarkable for young women to enjoy a round of golf today. Yet, it still remains an expensive sport—requiring access to clubs, proper gear, and the de rigueur golfing ensemble. The charming image of saucy maiko swinging clubs on the Eirakuya’s tenugui may seem at glance anachronistic. But it is no more so than observing a maiko perched properly on a chair in a fancy French restaurant.  Maiko point to affluence and training as well as to the subtle discipline demonstrated in a “nice shot.”