Mother’s Day in Japan takes place on the second Sunday in May.  The hanamachi celebrates this custom, too. Maiko and geiko honor their hanamachi “mothers”—the managers of okiya and ochaya as well as their teachers—by presenting them with bouquets of pink carnations. 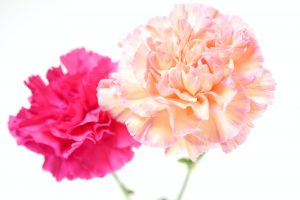 Photo by FLY:D on Unsplash

The Maternal Role of Hanamachi Mothers 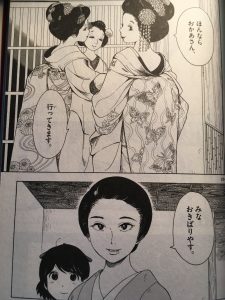 This okiya mother sends maiko off to their evening assignments, remindsing them, “Do your best.” Koyama Aiko, Maiko-san chi no Makanai-san, Vol. 1 (2017), p. 33

Certainly, the hanamachi could not survive without its mothers. They are its main business leaders, curators of tradition, and teachers of the next generations of maiko and geiko.  As I discuss in Maiko Masquerade, popular guides and fiction on the hanamachi praise okiya mothers (okāsan) for embracing a maternal role.

Fictional mothers, such as the okāsan of the Ichi okiya, depicted (left) in Koyama’s popular manga, nurture with affection, advice, and admonishment. Actual mothers portray their roles similarly.  Masuda Kazuyo, one Pontochō mother remarked, “Unless you think of them as your own children, you cannot raise [a maiko]. It truly warms my heart when even those who have left Pontochō to marry come back for
a visit, still calling me “Mother” (Interview with Kyoko Aihara, 2012).

What’s the history of Mother’s Day in Japan? 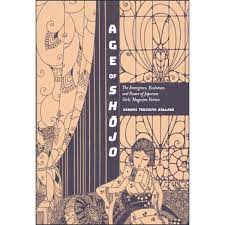 This attention to Mother’s Day in the hanamachi makes me curious about the holiday’s origins in Japan. Historians have written at length about its connection to American influence, militarism, and commerce. Here are just a few highlights.

It was American missionaries who introduced Mother’s Day to Japan.  In 1931, the Ministry of Education formed the Greater Japan Federated Women’s Association  (Dai Nihon Rengo Fujinkai ). At that point,  the Association rebranded Mother’s Day as a celebration of the March 6th birthday of Empress Kojun (1903-2000). In the postwar, however, as Hiromi Tsuchiya Dollase explains, Mother’s Day was “re-introduced as a Western holiday” (89). Dr. Dollase points to the cover of the girls’ magazine Shōjo no tomo (43, no. 5, 1950), featuring “Japanese Little Women,” which “explains how the Nishikawa family spent their Mother’s Day” (90).  Four smiling girls in western dress surround their mother, who wears kimono, as she opens a present.

Mother’s Day Carnations in the Hanamachi 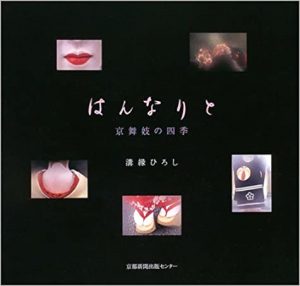 In 2004, photographer Mizobuchi Hiroshi captured kimono-clad maiko and geiko carrying gift bouquets of pink carnations in the Miyagawa-chō hanamachi. He remarks that the practice took hold in the hanamachi, but does not mention when or why (24).

Given the importance of okāsan leadership in the hanamachi, it is little wonder they are honored on Mother’s Day.