Maiko, Noodles, and the 47 Rōnin 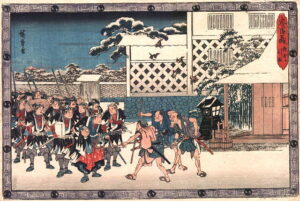 Maiko dancing and serving soba noodles to guests?  What was the story behind this March event?  In today’s post, I take up an annual Gion event with one foot in history and the other in myth. 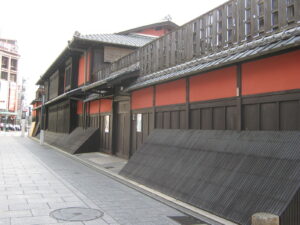 On March 20, Gion Kōbu honors the memory of Kyoto revolutionary Ōishi Kuranosuke, the leader of the 47 rōnin (masterless men). The ceremony takes place at the exclusive Gion teahouse, Ichiriki. Only regular clients are invited. 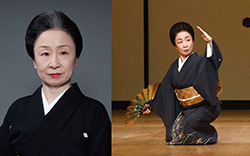 Who was Ōishi Kuranosuke? What’s his connection to Gion?

As part of an elaborate plot to avenge the death of his lord, the stalwart Ōishi assumed deep cover by disguising his true character. He played the part of a dissolute. For two years,  he frequented the Ichiriki teahouse until he and the 47 rōnin were ready to attack and kill their lord’s enemy.  The men were arrested and ordered to commit ritualized suicide (seppuku), which they did on March 20, 1703. Long romanticized in all manner of Japanese arts as symbolizing samurai loyalty, Ōishi and the 47 rōnin are buried at Sengakuji, a Zen temple near Shinagawa, Tokyo—their graveyard now a tourist site. 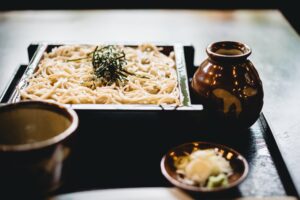 Lori Brau highlights the soba symbolism here. She explains how  uchiiri soba (soba of the raid) allude to the story that Ōishi and his band gathered at a soba shop. They ate this simple meal together before launching their raid and accomplishing their vendetta. Brau notes, “Soba’s tendency to break easily, due to its lack of gluten (which adds viscosity), renders it an apt symbol for parting (71).”

According to Lesley Downer, doubt exists as to whether the current Ichiriki was actually the site of Ōishi ’s debauchery. But, the connection has worked in the teahouse’s favor as “there were always people willing to dissipate an evening at the scene of the most celebrated partying in Japanese history (162).”

Why do tales of the 47 Rōnin  endure?

The Gion ceremony offers only one way of remembering Ōishi and the 47 Rōnin. All manner of art forms–puppet theater, Noh, film and TV, graphic novels and anime–have recounted versions of the tale. The tale has been put in service of widely different movements, including “popular rights, Christianity, capitalism, Marxism, pacifism, and contemporary cartoon culture (Tucker, 3).”

I caught up with John Tucker, Professor of History at East Carolina University, to ask why the tale endures. He’s the author of The Forty-Seven Rōnin: The Vendetta in History (Cambridge UP, 2018).   John responded, “The historic 47 Rōnin vendetta became an unparalleled sensation in Japan due to its retelling on stage as Chūshingura (Storehouse of Loyal Retainers). And of the eleven acts in that play, the most popular ones present Ōboshi Yuranosuke (Ōishi  Kuranosuke) as a dissolute hedonist enjoying himself in Kyoto’s pleasure quarters even while plotting to take murderous revenge on his late-lord’s enemy.” 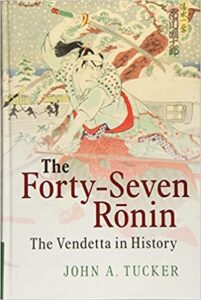 Author John A. Tucker
Cambridge UP, 2018

“Everyone knows the grisly end and so relishes the chance to share vicariously Ōishi’s last and quite shrewd tango with life,” explained John. “After all, his time in the pleasure quarters made Ōishi most fully human, alive with passions and flaws even if the latter were so much subterfuge for his mortal sincerity and lethal vengeance. In affirming life unto death, Ōishi epitomized an existential ideal that all admire, though few might actually realize.”

Want to learn more?  I recommend John Tucker’s The Forty-Seven Rōnin for an approachable, well-researched guide. Historian Peter Nosco praises the book as,  “The definitive book-length study by a uniquely qualified scholar of one of Japanese history’s most contested events.”   Perhaps read The Forty-Seven Rōnin this March while enjoying soba.

Downer, Lesley. 2002. Women of the Pleasure Quarters: The Secret History of the Geisha. New York: Broadway.

Tucker, John A.  2018. The Forty-Seven Rōnin: The Vendetta in History.  Cambridge University Press.