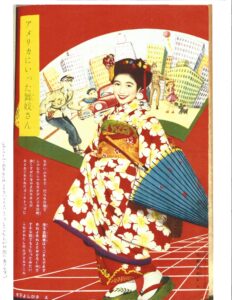 This story features  Satō Shigemi 佐藤茂美, a popular young singer of children’s songs who recorded with King Records. Here, she plays the role of a maiko.

The Maiko who went to America

The text alongside the image goes something like this:

“Captivated by the sight of the maiko walking gracefully in the American city in her furisode kimono and darari obi, the patrol officer forgets all about directing the traffic. The cars on the road are unable to move.  Looking on in surprise, the maiko feels like singing one of her favorite songs.”  ”This is my April’s Fool prank.”

The comic image of the maiko abroad 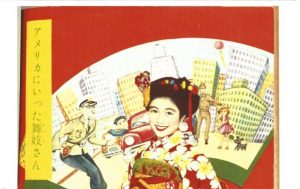 Artist Kinoshita imagines a policeman directing traffic in New York City. Everything comes to a stop when the man is enchanted by the flowing sleeves and long obi worn by an adorable maiko. An American serviceman and a little girl standing nearby seem equally surprised.  With her pretty blue parasol, colorful kimono, and kanzashi hair ornaments, the maiko makes a fetching—and traffic-stopping— sight.

Shōjo, a magazine for girls

This story comes from the April 1954 Shōjo  (Girl). A monthly illustrated magazine, Shōjo introduced movies and teen stars such as Satō Shigemi. Shōjo carried lots of fiction and manga appealing to girl readers (Kikuyo Library). Kōbunsha published Shōjo from 1949 to 1963.  In Maiko Masquerade, I write about the maiko as shōjo.

For analysis of Japanese magazines for girls, see Sarah Frederick. “Girls’ Magazines and the Creation of Shōjo Identities.” In Routledge Handbook of Japanese Media, edited by Fabienne Darling-Wolf, 22–38. London: Taylor and Francis, 2018.