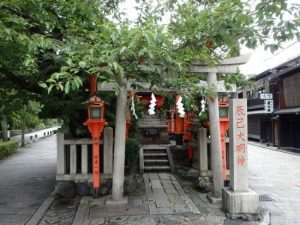 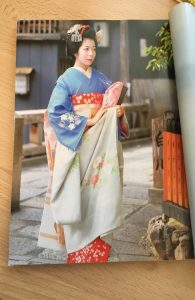 Closing her eyes, she clasps her hands. The maiko prays before the Shinto shrine. Her silver kanzashi hair ornament glitters. But her anxious posture shows how much she wants the kami to hear her plea.

Who is this anxious maiko?
Why does she pray for celestial comfort at this shrine?

The maiko is Yumehana (given name Nozomi), the TV drama is Dandan, and her anxieties center on dance. It has been a tough day.  First, we saw Yumehana’s dance teacher harshly correcting her at the morning lesson. Next, we saw Yumehana’s rival, maiko Suzuno, taunting her at the evening party. Wickedly clever, Suzuno even maneuvered Yumehana into performing her weakest dance in front of clients at the party.  Desperate to improve her dance skills —the maiko’s signature art—Yumehana makes her plea at Tatsumi Daimyōjin Shrine辰巳大明神神社.

You will find the shrine at the foot of Tatsumi Bridge which spans Shirakawa (White River), a gentle stream. Old teahouses on one side of Shirakawa amid weeping cherry trees make this a picturesque sight. One of the most photographed in Kyoto, the scene calls to mind romantic notions of Gion’s past. 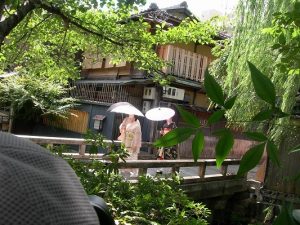 A maiko walking behind others on Tatsumi Bridge over the Shirakawa.

First, we learn that the kami of the shrine is Benzaiten 弁財天, who is “a deity highly popular among artists and musicians, as a patroness and guardian deity of the arts (Reader).” 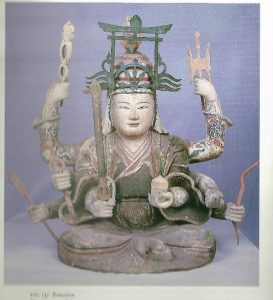 Wooden sculpture of the goddess Benzaiten at the Hogon-ji Temple. Watsky, A. M. (2004).  Wikimedia Commons

Originally a Hindu deity, Benzaiten, also known as Benten, has found homes in Japan in Buddhist temples and Shinto shrines alike. She’s also one of the Seven Lucky Gods, “a multicultural, mixed gender, and religiously diverse group of deities who share the common cause of providing benefits to people (Reader & Tanabe,157).”

Next, we find that the sound “tatsu” in Tatsumi reminds us of the verb tatsu, “to improve one’s skill.” In fact, maiko and geiko really do pray for arts improvement at Tatsumi Daimyōjin Shrine, invoking Benzaiten’s blessings to “improve” their arts.

But Dandan does not leave everything up to Benzaiten.

When Yumehana’s mother, the successful geiko Hanayuki, catches sight of her daughter, viewers see her empathy. Hanayuki remembers battling the same anxiety in her own maiko days.  But she faces Yumehana with practical advice and parental tough love, “Well, if that’s the case, then there’s nothing else to do but concentrate on your lessons every single day.”

The scene underscores one of the prime messages of Dandan—struggle against insecurity and work hard at achieving your goals.

Setting this exchange at Tatsumi Daimyōjin Shrine, Dandan acquaints viewers with this small Gion landmark, inviting us to find out about its history and the celestial comfort it offers to townspeople and artists alike.

Visitors to Kyoto can easily find Tatsumi Daimyōjin Shrine on tourist maps of the Gion. Shinto ceremonies are performed at the shrine four times a year by a priest from the much larger Fushimi Inari Shrine.  The petite shrine is especially beautiful in spring when nearly covered by the weeping cherries.