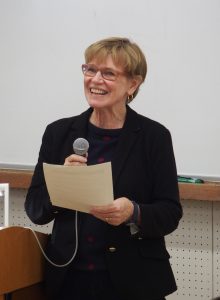 Jan Bardsley is Professor Emerita of Asian and Middle Eastern Studies at The University of North Carolina at Chapel Hill. She is the author of Women and Democracy in Cold War Japan (SOAS Studies in Modern and Contemporary Japan, Bloomsbury, 2014) and The Bluestockings of Japan: New Women Fiction and Essays from Seitō, 1911-1916 (University of Michigan, Center for Japanese Studies, 2007) for which she was awarded the 2011 Hiratsuka Raichō Award by Japan Women’s University. She is also author of the forthcoming book Maiko Masquerade: Crafting Geisha Girlhood in Japan (University of California Press, 2021).

She is co-editor with Laura Miller of Manners and Mischief: Gender, Power, and Etiquette in Japan (University of California Press, 2011) and Bad Girls of Japan (Palgrave, 2005) and co-producer/director with Joanne Hershfield of the documentary, Women in Japan: Memories of the Past, Dreams for the Future (2002).

The recipient of several campus teaching awards, Bardsley regularly taught the course, “Geisha in History, Fiction, and Fantasy” at UNC-Chapel Hill from 2001 to 2018 and presented talks on geisha to university and community audiences across the U.S.