Maiko Greetings with “Stroke of a Pen” Notes

Which pretty notepad will the maiko choose?

Momohana, the star maiko of Koyama Aiko’s girls comic Kiyo in Kyoto: From the Maiko House, gazes at two long, narrow notepads.  Both pretty options!  Which to choose?

Koyama depicts Momohana browsing in a shop brimming with fans, maiko hair ornaments, and stationery. Her fictional shop closely resembles the lively Gion store, Yamakyo. Established in the Taisho era (1912-26) as a specialty paper store, Yamakyo began selling Japanese-style paper products and other items for maiko, geiko, and Kabuki actors in early Showa (1926-89). If you click the link to Yamakyo, you can see that it still sells many paper products, including the narrow notepads like Momohana holds.

After making her purchase, Momohana takes off on her afternoon round of greetings to the teahouses in her hanamachi. The notepads will come in handy, as we later learn.

Greeting the okami-san with a short note

Finding one okami-san (manager) away from her teahouse, Momohana pulls out one of her trusty new notepads. She pens a short note and leaves it with a housekeeper to pass on. The notepad cover is marked 一筆箋 (ippitsu-sen), a “slip of paper for one stroke of the pen.”  Sometimes translated simply as “one slip notes.”

What are ippitsu-sen? How are they used?

Maiko are not the only ones who use ippitsu-sen.  They are a common paper for short notes at work and among friends and family.  These notes may be plain, business-like and efficient or warm and funny.  Books published in Japanese guide readers to all kinds of ways to use ippitsu-sen.  Since I had long been curious about these pretty notepads, using them merely for to-do lists and phone messages, I was eager to learn more. 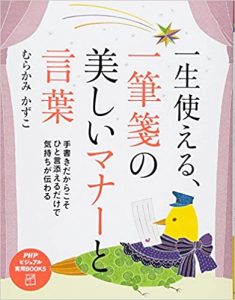 To find out about ippitsu-sen, I turned to the colorful guide authored by Kazuko Murakami, Lovely Manners and Words for One-Slip Notes. This is one in her series of manuals directed to women readers offering advice “which you can use your entire life.”

Murakami champions the warmth of the handwritten note—the human touch—amid the ubiquity of electronic communication in email, texts, and social media platforms. She advises that even a short note will touch the person who receives it, inspiring “goodwill and trust.” Murakami recommends using these short notes to boost one’s communication skills and self-confidence.

Getting started with ippitsu-sen: Choose your favorite design 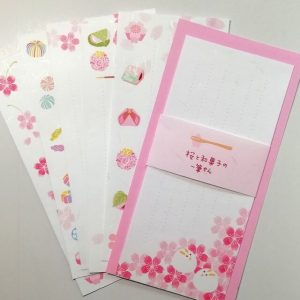 Murakami introduces several types of ippitsu-sen: designs variously associated with the season, good luck symbols, locale, or a current topic. Other designs might reflect your own hobbies, work, or even your name. You can add personal flair (jibun rashisa) by adding stickers and using inked, wooden stamps (hanko).  Although choosing a design with the recipient in mind can be lots of fun,  Murakami advises that it’s fine to choose plain paper, too. Selecting a pale pink or blue may seem softer and friendlier than white.

Do you write vertically or horizontally?

You can write Japanese vertically (top to bottom, right to left) and horizontally (left to right, as in English). How about when writing ippitsu-sen?

Murakami  advises  readers that either way is fine, but writing vertically will seem more business-like and official. In Momohana’s case, we see that she writes vertically in her ippitsu-sen for her elder, the okami-san. Her casual mini-card to her pal Kiyo shows the horizontal style. Similarly, Murakami’s models for all the formal ippitsu-sen in her book, and all written to people older or in positions of some importance are written vertically. The model informal notes to children and husband use the horizontal format. [In the gendered universe of stationery, I did find some sites aimed at men as potential ippitsu-sen users, including one that shows how to use ippitsu-sen for a thank-you note in English].

Momohana’s ippitsu-sen was a success.  Later in the chapter, we see the elderly okami-san who had received the note calling that evening at Momohana’s okiya. Apologizing for being out earlier, she holds up Momohana’s note. 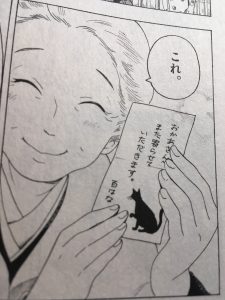 She exclaims how delighted she was with the black cat on the stationery–it’s just like her own cat.  The okami-san thanks Momohana for choosing such a thoughtful, personal design (p. 24). (Momohana’s surprised look makes me think this might have been a lucky coincidence).

Once again, star maiko Momohana has made an excellent impression.

Murakami Kazuko, Isshō tsukaeru, ippitsu-sen no utsukushii manā to kotoba [Lovely Manners and Words for One-Slip Notes You Can Use Your Entire Life]. Kyoto: PHP, 2015; rpt. 2108.

The featured image for this post–maiko ippitsu-sen–comes from amazon.co.jp on May 11, 2021.